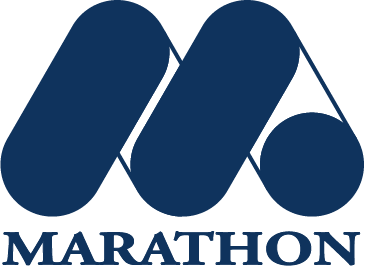 However, Marathon is now switching muskets for mozzarella and marinara as it moves into the pizza delivery game with Domino's.

Legendary pizza franchise Domino's made headlines back in 2013 when it completed the first ever pizza delivery by air. Dubbed the DomiCopter, the aerial drone took a piping hot pizza from the Domino's kitchen to a hungry customer in just a few minutes.

Then, on April 1, 2015, UK pizza lovers appeared to be treated to a Domino's delivery completed by no-less than a driverless motorbike. Unfortunately, the news and accompanying video transpired to be an April Fool's Day joke - though it did show us that one day we might be looking at a world with driverless delivery vehicles motoring around the streets. Now, with its Marathon-powered military-grade delivery robot, it appears that day has come.

The result of the collaboration between Domino's and Marathon Robotics is a friendly-looking little bot named DRU (standing for Domino's Robotic Unit). 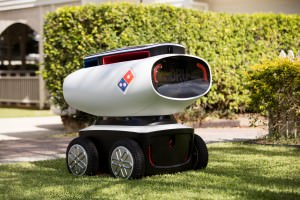 The robot makes use of the reams of GPS data which has been gathered from its human colleagues as they've delivered Domino's products over the years and combines it with the very latest in driverless vehicle technology. Using a smorgasbord of sensors and AI technology, DRU can travel along sidewalks and cross streets, all the while perceiving and, where necessary, avoiding people and obstacles.

The robot has insulated compartments designed to keep hot food hot and cold drinks and ice-cream cold. It can monitor and adjust its speed to suit the terrain and has powerful suspension to ensure the customer's pizza arrives with all the toppings still on top.

"Meet DRU," says the Domino's Australia website. "He's our newest recruit to the Domino's family. He might look a little different to our current team of delivery experts and that's because he is! DRU is an autonomous delivery vehicle and is set to take the world by storm. With sleek, refined forms combined with a friendly persona and lighting to help customers identify and interact with it, DRU is a world first in the space of commercial autonomous delivery."

You may be wondering why Domino's is investing so much time (and presumably money) in robotic delivery systems. Well, in part it's due to the changing landscape of the way people interact with fast food brands. Thanks to online delivery hubs such as Just Eat, Grubhub, Foodler, Food Panda, and a plethora of others, people are ordering food for delivery more than ever before. In addition, freelance courier companies such as Deliveroo are facilitating delivery for brands such as Burger King, KFC, and Pizza Express, many of which have traditionally been reluctant to offer home delivery services.

With this rapid growth driving the quick service restaurant industry, a veteran such as Domino's is predicting that it won't be long before there aren't enough delivery drivers to meet the demand. It reasons, therefore, that a fleet of autonomous vehicles will be ideal for handling smaller orders and will free up precious human drivers to deliver larger ones. Sending a driver and a car/van out with a single pizza is inefficient and uneconomical, so DRU is designed to maintain the rapid service Domino's customers expect, while also being more efficient in allocating resources.

This should alleviate any concerns that the robots are coming for anyone's job, Domino's' intention clearly being for bots to augment the human workforce, rather than replace it. The DRU is still under development by Marathon Robotics, so it remains to be seen how successful it will be in Australia before any thought can be given to an international rollout.

Technology aside, automated vehicles have numerous legal hurdles to overcome before they can be taken past the testing phase. Safety regulations and state and federal approval must be passed and obtained, and this is likely to vary by region.

From Amazon to Google, many companies are currently experimenting with robotic delivery systems. While they seem exciting in theory, there is still a lot of work to be completed before we'll know whether they'll be a regular sight on the streets and in the skies.

Robotic delivery systems are set to be a hot topic at Future Stores East 2019, taking place in February at the JW Marriott Miami, FL.